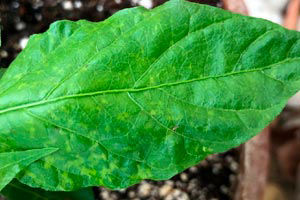 Nutritional disorders include deficiencies of nutrients, toxicities or excesses of nutrients and other elements, and excessively high or low acidity. In hydroponics one can expect deficiencies of most of the essential nutrient elements, i.e., nitrogen, potassium, calcium, magnesium, sulfur, phosphorus, iron, manganese, boron, zinc, copper. Silicon or sodium deficiencies might occasionally develop in some plant species. It is difficult to induce chlorine and molybdenum deficiencies.

The more common excesses include nitrogen (i.e., ammonium or nitrate), phosphorus, boron, manganese, copper. They also include generally excess salinity involving chloride, and the major nutrient salts, especially where solutions are allowed to become concentrated by plant transpiration. Sodium, as a contaminant supplied with high-sodium water, can become excessive for sensitive species.

Excessive acidity or alkalinity (pH) easily develop in hydroponic systems; plants can change the pH drastically and quickly. This plant effect can be manipulated by altering the proportions of nutrients, especially ammonium and nitrate. More ammonium favors acidification, more nitrate favors alkalinization. The pH can be controlled by frequent addition of the right amounts of acid (sulfuric, nitric, or hydrochloric) or alkali (calcium hydroxide, calcium carbonate, potassium hydroxide or bicarbonate).

All these factors-nutrient deficiency, excess, and pH-interact with each other. Sometimes a disorder arises because the nutrient formulation provides a level too high for a particular species te.g., several leguminous species find Hoagland's solution 2- to 50-fold too high in manganese or phosphate). More commonly, the original formulation is satisfactory but the disorder develops as the plants alter the medium. Such disorders are less likely to develop where plants are grown with generous volumes of solution, frequently renewed, or replenished, or monitored and adjusted.

Onset of deficiency is often different in hydroponics than in soil. In soil, deficiency usually develops as plant demand outstrips either the slow release of nutrient from solid form or the slow movement of dissolved nutrient to the root. In hydroponics, deficiency sets in more precipitously; the dissolved supply runs out, with no solid forms in reserve. This difference can have consequences in hydroponics, as compared with soil culture: i) deficiency symptoms may be different and more spectacular; ii) plant analysis is less useful for diagnosis, and plant symptoms more useful; iii) deficiency can rapidly become severe; iv) recovery from prompt correction can be rapid.

Hydroponics cultures also lack soil's capacity to inactivate toxic elements, which can readily concentrate as water is lost by transpiration. The range between sufficiency and toxicity of nutrients such as boron can become extremely narrow.

Symptoms are often ambiguous clues to disorders, but they help the observer who has gained experience with the particular plant and conditions. One way to gain this experience is from watching deliberately induced disorders, something readily done with hydroponic culture. Nearly always the indications from visible symptoms should be checked by other tests, particularly plant response trials.

Nutritional disorders commonly limit growth considerably before symptoms appear. If your aim is optimal plant performance, watching for symptoms will not substitute for good media control and analytical monitoring.

Symptoms of disorder develop in different parts of the plant-young shoot, older shoots, or roots-and this localization helps interpretation and diagnosis.

Plants can remobilize certain nutrients from old tissues as a deficiency develops, permitting new growth to continue at the expense of the old. Other nutrients are not remobilized. This different mobility in the plant reflects in the symptoms. The first symptoms of deficiency of a plant-immobile nutrient appear in young leaves or growing points (e.g., calcium, iron, manganese, zinc, copper, boron). In contrast, the old leaves show the first or most severe symptoms of a readily mobilized nutrient (e.g., nitrogen, potassium, phosphorus).

Many toxicities show up most clearly in old tissues, particularly where the toxic element moves freely with transpiring water in the plant (e.g., nitrate, chloride, sodium, potassium, boron).

A clear view of the roots is an advantage hydroponic systems. Root stunting, stubbiness, and browning are early symptoms of acidity, calcium deficiency, and toxicities of aluminum and copper.

The main kinds of symptoms are: chlorosis (yellowing), purpling, local necrosis (tissue death), and stunting. The following description indicates the nutritional disorders that most often produce these symptoms, as well as some of the non-nutritional causes with which they can be confused.

Overall Chlorosis: generalized yellowing of leaves; may indicate deficiencies of nitrogen or sulfur, especially when it occurs mostly on older leaves. Chlorosis due to N deficiency is a familiar sight in soil grown plants. Chlorosis may also precede death of the older leaves during the onset of damage from excessive levels of sodium, potassium, chloride or phosphate. Chlorosis of part of the mature leaves is sometimes a sign of magnesium deficiency. Non-nutritional causes of generalized chlorosis include old age, lack of root aeration, or lack of light.

Interveinal chlorosis: yellowing between leaf veins, with the veins forming a green pattern, is a symptom of deficiencies of iron, manganese or sometimes zinc or copper. In turn, these deficiencies (especially iron) may arise from alkalinity (excessively high pH) in the growth medium, which makes these metals less soluble. Non-nutritional causes of interveinal chlorosis include virus diseases; and some ornamental plants are normally yellow between the veins.

Purpling: accumulation of anthocyanin pigments; causes an overall dark green color with a purple, red, or blue tint, and is the common sign of phosphate deficiency. Some plant species and varieties respond to phosphate deficiency by yellowing instead of purpling. Purpling is natural to some healthy ornamentals. And it also results from drought and aluminum toxicity, two disorders that are common in soils but perhaps not in hydroponics.

Local necrosis: "firing," "leaf burn," or death of patches or spots or margins on leaves; is a sign of K deficiency, and of the less common molybdenum deficiency in plants fed with deficiencies when nitrate, ammonium, chloride, sodium or potassium. Non-nutritional causes include frost, severe drought (or low humidity), and sun scorch. The shape, position, and color of the dead areas vary depending on the disorder and the plant, and these features can help sharpen the diagnosis.

Stunting: overall stunting of the whole plant is a sign of all nutrient disorders, and the hardest to detect unless normal plants of the same kind and age are nearby for comparison. However, certain disorders produce acute stunting of growing points or young leaves, resulting in characteristic growth patterns. Zinc deficiency produces "little leaf" in many species, especially woody ones; the younger leaves are distinctly smaller than normal. Zinc defeciency may also produce "rosetting"; the stem fails to elongate behind the growing tip, so that the terminal leaves become tightly bunched. Deficiencies of boron, calcium, potassium, and sometimes zinc can kill growing points, and in woody plants especially, this can lead to dieback of the shoot.

An interaction occurs when two factors modify each other's effect. Interactions are common in plant nutrition. A consequence is that what holds for one plant or culture formulation or environment does not always hold for another set of conditions.

Many interactions that occur in soil or at the soil-root interface do not appear in hydroponic culture, but even so there are scores of possible interactions. The following are examples.

Under ideal conditions most plants can get along with very low levels of calcium, much lower than they encounter in ordinary soils or hydroponic media; but these low levels become insufficient under excessive acidity, aluminum, manganese, or sodium. The high levels of calcium supplied in most culture solutions help protect against these factors.

The pH or degree of acidity/alkalinity of the root medium greatly influences plant nutrition. The effects are greatest near the extremes of plant tolerance: at the acid end as the pH falls below 5.5 towards 3.5, and at the alkaline end as the pH rises through 7.0 (neutrality) towards 9.0. Acidity increases the calcium requirement (mentioned above), aggravates damage from high levels of ammonium (rather than nitrate) nitrogen, and helps dissolve aluminum, copper and manganese to produce possibly toxic levels in solution. Alkalinity forces zinc and especially iron out of solution, often leading to severe deficiencies of these metals despite the use of chelating agents to help keep them in solution.

Most hydroponic media formulations supply dissolved phosphate concentrations at least 100 times higher than soils do. This is deliberate; it is difficult to mimic the soil's ability to maintain a constantly renewed supply of dissolved phosphate at extremely low concentrations. Recent studies indicate that high phosphate concentrations can cause phosphorus toxicity in several kinds of plants, especially if iron and calcium nutrition is not ideal, or if nitrate is kept at low levels. (With cowpea, a vigorous phosphorus absorber, we had to lower phosphate from the usual 1 millimolar down to 0.005 millimolar to stop symptoms and growth reduction.) High phosphate can also aggravate salt damage and zinc deficiency. Judicious reduction of phosphate levels in hydroponics may turn out to be an appropriate modification for many kinds of plants.

Light intensity influences the expression of symptoms of some deficiencies and toxicities. For example, growth at low light intensities suppresses the development of symptoms of zinc deficiency and phosphate toxicity. More important, when increasing light improves growth it also increases the nutrient demand and the likelihood of all deficiencies.

Humidity interacts most strongly with salinity effects. This matters most in species with little ability to keep out toxic ions, such as chloride and sodium, that are carried with the vigorous transpiration stream caused by high humidity. Left in the leaves as the water evaporates, the ions accumulate, causing progressive leaf death and leaf drop. Sensitive species, such as bean, can suffer even at low solution chloride levels (about 10 millimolar) not normally considered salty.

Analysis of plants and comparison with established critical levels can be a useful check on the correctness of a diagnosis. However, critical nutrient deficiency and toxicity levels are not established for many interesting plant species, analysis can be costly and slow, and there are straightforward, direct, and reliable methods the grower can do himself. Plant response trials are the ultimate test, and in hydroponic culture they can often give results within a few days. Examples:

a. Question: Do the plants have a nutritional problem?

Tests: Run a comparison to see if the plants improve when you change the nutrient solution. Changes could include doubling or halving the nutrient strength, or increasing the rate of replenishment.

b. Question: Which nutrient is at deficient (or toxic) levels?

Tests: Compare to check any plant response to doubling of a nutrient thought to be too low, or halving a thought to be too high. For micronutrients (iron, manganese, zinc, copper, molybdenum) foliar spray applied to a plants can give a rapid response, even when dealing deficiency induced by immobilization in the root medium. (About 0.1% solution concentrations of the nutrient compound with a touch of detergent are likely to work as foliar sprays with moderate risk of damage.)

c. Question: Is the pH or the total salinity getting out of line?

Tests: Response trials like (a) above can help here. So can direct tests of the root medium. One can measure acidity/alkalinity with pH test papers ($10) or an electronic pH meter ($250 and better than paper if itís kept calibrated). One can measure salinity using an electrical conductivity meter with metal electrodes in a simple dip cell.

Observations like these equip the operator to make informed adjustments of nutrient levels and rates of replenishment and dilution.

(Use with caution. Plants haven't agreed to it.)

New leaves with interveinal chlorosis, similar to above: manganese deficiency

New and middle leaves pale mottled at edges, or pale except at base and midrib; sometimes with red areas: magnesium deficiency

Plant green, with old leaves becoming yellow except for base and midrib: magnesium deficiency

University of California, Division of Agricultural Sciences. Diagnostic tests for soils and plants.

U.S. Department of Agriculture. Handbook 60. Diagnosis and improvement of saline and alkali soils.

Courtesy of the Hydroponic Society of America. Used by permission.