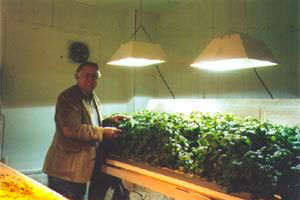 Growing Under Lights in Montreal

An article about growing under lights by Gordon Creaser

When Greg and Frances Miller first proposed building a farm in downtown Montreal, under lights, I thought this would be quite a challenge. Greg's first step was to research the possibility of renting a vacant basement in the city. He soon found one that included an abundance of clean water and inexpensive electric power. The Millers laid out the plans for their urban hydroponic farm, using an area measuring 18 1/2 x 50 ft.

They set up growing trays with a 1-in. slope over 6 ft. One table has five troughs that are fed by two drip systems from Australia. Each drip feeder processes 1 gal/hr. The troughs are filled with a 2 1/2 in. layer of perlite. The nutrient feed tank originally consisted of a 2 x 12 x 2 ft. plywood box lined with a polyethylene liner. It held about 1,000 L (260 gal.). After the tank started leaking, they scraped it and substituted two solid-molded tanks, each holding 52 gal. A 1-HP pump was connected on a platform above the tanks with a bypass to take the extra nutrient pressure. This allowed good circulation and aeration of the nutrient.

The advantage of these tanks is that they are only 17-in. high, so they are lower than the benches to allow adequate return of the nutrient through the drip system. The nutrient is at about 75 degrees F ambient temperature.

They started with seven sets of three 1,000-W metal-halide lights, equally spaced. After the plants were in, they decided to add another row of lights, so they had to reinstall them all to maintain the equal spacing. The heat from the lights is ventilated to outside.

They use a nutrient mix of 50% Peters 5-11-26 and 50% calcium nitrate. Initially, they added water to the tank manually which gave a false EC reading. With the inaccurate reading, they were adding too much fertilizer. When they attached a float valve to give a better reading, they could reduce the fertilizer.

They seeded their first basil plants in mid-October in about 600 plugs. Everything didn't go perfectly at first, of course. Timing is everything. When the plants sprouted, they sat in the dark for about a week. Then they didn't receive enough water. But plants are tough, and the majority made it through.

On November 29, the hydroponic system was finished and off and running. The Millers transplanted the basil seedlings into the perlite. The transplants were about 6-in. high. Room left over on the tables was used for direct seeding.

These seeds sprouted quickly and within five weeks were ready for cutting. By December 22, the transplanted herbs were cut, and the Millers obtained 25 lb.

When I arrived to check out their system, Greg thought he had a disaster on his hands because the plants were too tall and slightly yellowish in color with a dark ring around their base. The darkening of the stem is a natural phenomenon for basil because the stems become woody and some get salt-damaged.

Everything seemed to be working correctly in their system. I deduced that they had been keeping the nutrient for too long ( it needed to be flushed every two weeks. The plants also needed to be hacked down to manageable levels and to promote more bushy growth.

Last I heard from the Millers, sales were picking up and they were planning to expand. Their hydroponic herb business is called Fraicherbe. Although it was a challenge, the Millers made a good choice. Montreal is a good place for growing and selling herbs because of the city's many gourmet restaurants. They proved that it is profitable to grow indoors and advantageous to be growing close to their market. You can contact Fraicherbe at (514) 938-0233 or Greg Miller by e-mail at miller@aei.ca.

Gordon Creaser is a regular columnist for The Growing Edge and a professional hydroponics consultant.